Former U.S. president Barack Obama is scheduled to answer questions of 300 young Europeans at an event on 6 April 2019.

As the Democratic Foundation announced on Tuesday, 19 March 2019, the 57-year-old former President of the United States will be answering questions from young people at an event on April 6. The Obama Foundation has called for questions at www.obama.org/berlin/ to be submitted to the ex-president for the event in Berlin.

Not the first Obama visit to Berlin

According to the foundation, around 300 young people from Europe who are involved in areas such as civil society, integration or food security are taking part in the town hall. Obama has already been to Berlin several times. Most recently, he took part in a panel discussion with Chancellor Angela Merkel at the Kirchentag in May 2017.

Barack Obama will speak at the town hall on Saturday, 6 April 2019 at 3:15 p.m. local time. The event will be streamed live on obama.org. The event is held at the European School of Management and Technology Berlin (ESMT) at Schlossplatz in the Mitte district - not far away from Hotel Adlon where Barack Obama is staying. 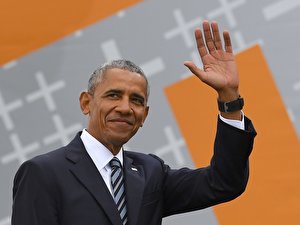 Pictures of Barack Obama at the Kirchentag in Berlin on 25 May 2017. more