No more karaoke in Mauerpark?

No more karaoke in Mauerpark?

The district administration of Pankow is considering banning the Sunday karaoke sessions at Mauerpark because current construction works may pose a risk to visitors. Since 2009, people have been singing karaoke in the Berliner Mauerpark: In summer, hundreds of people make the pilgrimage Sunday after Sunday to have fun and their 15 minutes of fame at the bearpit karaoke show. But the planning process for the 2019 karaoke season has come to a standstill because Bezirksamt Pankow does not want to grant the necessary permission for the event at this point.

No Mauerpark karaoke in spring?

Usually, the open-air event takes place every Sunday afternoon from Easter onwards in the amphitheatre in Mauerpark. For 2019, authorities do not want to approve the event until summer at the earliest - because of potential security risks posed by construction works by Berliner Wasserbetriebe. Wasserbetriebe are currently constructing tunnels for an underground reservoir beneath Mauerpark.

Critics say the real reason for the delay are complaints by local residents about the noise. A spokeswoman of the Berliner Wasserbetriebe told the press that the tunnels have been sufficiently secured by fences and that there is not danger to any visitors. Writer Wladimier Kaminer, who lives right next to Mauerpark, and member of German parliament, Klaus Mindrup, also spoke out against the ban of Mauerpark karaoke. Meanwhile, Bezirksamt Pankow has promised to reconsider its decision. 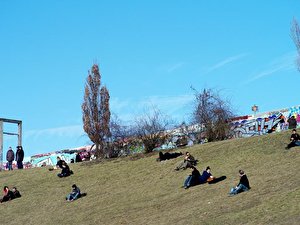 Mauerpark is a public park in the Prenzlauer Berg district. A former part of the Berlin Wall, the park is popular with people of all ages and turns into a flea market and karaoke stage on weekends. more