Tech giant Google has a new office in Berlin and plans to expand in the German capital. The opening of the office near Museum Island was accompanied by protests. On Tuesday, 22 January 2019, the tech giant and local politicians - among them Mayor Michael Müller - celebrated the opening of the new Google office in Berlin. The opening event was accompanied by protests. Demonstrators gathered in front of the building, protesting with posters, loud techno music and drumbeats against the US Internet company.

Google plans to expand in Berlin

In a joint project, the Internet giant wants to further expand the existing "Google Future Workshop" programme in Berlin. With the new office near Museum Island, the company is moving into an independent building in the capital for the first time. So far, around 130 employees work there, in the future it will be 300.

No to start-up campus in Kreuzberg

Originally, Google also wanted to open a campus for start-up companies in Berlin. But there was a lot of resistance in the neighbourhood. Critics protested because they felt that the campus would have changed the area considerably and made it more expensive. In a former transformer station in the Kreuzberg district, Google and the participating organizations announced last October that a social institution would be built instead. 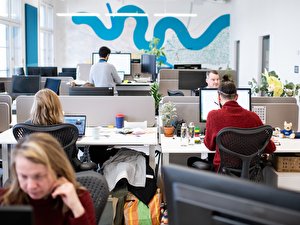 Take a look at the new Google offices in Berlin. The space provides about 300 work spaces and a training centre, the Google Future Workshop. more