The Biesdorf castle and park are among the most important architectural monuments of the 19th century in Berlin and are a popular excursion destination.

Biesdorf Castle is considered a especially valuable ensemble of 19th century architecture and garden art. The castle park is one of the most beautiful green spaces in the district and is protected as a monument.

Development of the Biesdorf Castle Park

The creative development of the park began in 1868, when landowner Hans Hermann von Rüxleben commissioned the building of the palace. This included a four hectare park and an ice cellar. In 1887 Werner Siemens acquired the entire estate and two years later his son Wilhlem von Siemens took over his father's estate. Under his leadership, the park was laid out and extended in the English style by the Berlin city garden director Albert Brodersen in 1891. This specially maintained special garden was characterized by a fine artistic design of the terrain, curved paths, short lawns - surrounded by deciduous and coniferous trees and shrubs. The flower decoration was mainly represented by potted plants.

Design of the palace garden

Visitors to the park can see an alternation of large, bright meadows with densely planted shrub and tree groves. The park is criss-crossed by picturesque views and lines of sight. The park represents the oldest and largest coherent stock of trees in Marzahn. Impressive are the facilities created around 1900, such as the fountain pond, the ice cellar with double open staircase, the tea pavilion and a lawn tennis court, which today serves as a reading garden.

In May 2010, the Biesdorf Castle Park received the Green Flag Award. The green flag, the "Green Flag Award", is a prize that is awarded nationwide in Great Britain for parks that present themselves to the public in an open, visitor-friendly and clean way.

History of the castle

The tower villa was built by order of the landowner Hans Hermann Freiherr von Rüxleben in 1868. After Wilhelm von Siemens acquired the entire estate in 1887, he had the castle renovated and made numerous structural changes.

The facility is located on the north side of the Biesdorf village green, slightly elevated in the approximately 14 hectare landscape park. The castle is a late classicistic plaster building with a T-shaped ground plan, which is based on Italian models.

The upper floor was destroyed in 1945, later demolished and initially replaced by a flat roof. In front of the western main entrance there is a covered driveway in the form of a portico. The south and east sides are loosened up by column-decorated loggias and pergolas. On the southeast side there is a high octagonal tower with a belvedere. The asymmetrical grouping of the villa with its tower, gabled fronts, pergolas and loggias, as well as its classically strict architectural order and proportion, gave the building a balanced, graceful effect on all sides.

This was also reflected in the internal spatial planning: The entrance hall led to a central octagonal plank room, which was lit over two floors by a skylight in the roof and around which the rooms of the two floors were grouped.

Extensive renovation of the castle

After extensive renovation work, Biesdorf Castle was given back its upper floor and thus its historical appearance. The façade and the park were also reworked. 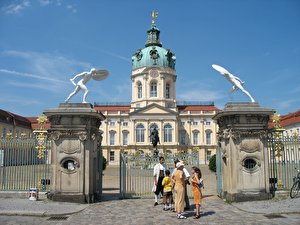