The Reichstag building was designed by Paul Wallot and built southeast of the meander of the Spree. After ten years of construction work, the final stone was laid by Kaiser Wilhelm II on 5 December 1894. The six-story complex in the style of the Italian High Renaissance covers an area of about 13,290 square meters, and its four towers are 40 meters high. “Dem deutschen Volke” (To the German people) was inscribed above the main entrance in 1916.

The events of 9 November 1918, when the Social Democrat and member of parliament Philipp Scheidemann proclaimed the republic from one of the windows of the building, focused political attention on the Reichstag. The democratic constitution of the first German republic, passed in Weimar on 11 August 1919 by the National Assembly, expanded the parliament’s authority considerably.

The Reichstag building suffered heavy damage in bombing raids during World War II, and the fight to take the building continued until the very end. In 1955, the Bundestag decided to rebuild it, although without a dome, the original of which had been demolished in 1954 because it was structurally unsound. Renovation was carried out according to plans by Paul Baumgarten and not completed until 1972. The decorative figures that had been destroyed were not restored, and the façade was simplified. Despite the restrictions on use mandated by the Four-Power Agreement, parliamentary committees and groups met in the Reichstag building as often as possible. On 4 October 1990, the first parliament representing all of Germany and consisting of members of the Bundestag and former members of the GDR’s Volkskammer (People’s Chamber) met in the plenary chamber of the Reichstag building, followed two months later by the first sessions of the freely elected, all-German Bundestag beginning on 20 December 1990. 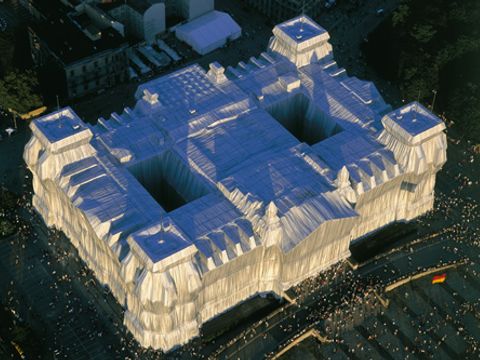 The veiling of the Reichstag building by the artist couple Christo and Jeanne-Claude attracted attention worldwide. Their “Wrapped Reichstag” project ran from 23 June to 6 July 1995 and drew more than five million visitors. Shortly after the Reichstag building was “unwrapped,” remodeling and modernization began according to plans by the British architect Norman Foster. 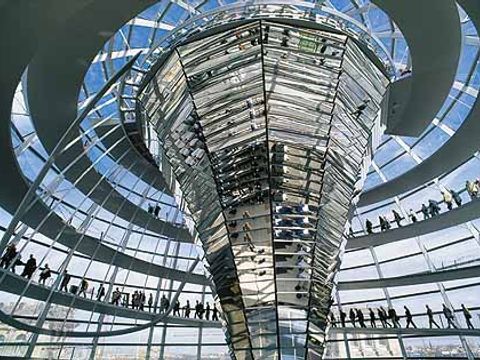 The new Reichstag building was officially opened on 19 April 1999. The new dome, which visitors can enter, has proven to be an especially strong attraction and has become a symbol of the parliament and government district. Eight hundred tons of steel and 3,000 square meters of glass went into building this structure, which is 23.5 meters high, while 360 mirrors provide daylight to the newly designed plenary chamber. The parliament took up its work in Berlin at the end of the summer recess in 1999.

The German Bundestag’s office buildings – the Jakob Kaiser House for members of parliament, the Paul Löbe House for parliamentary committees, and the Marie Elisabeth Lüders House for the library and the reference and research services – are all located near the Reichstag building.