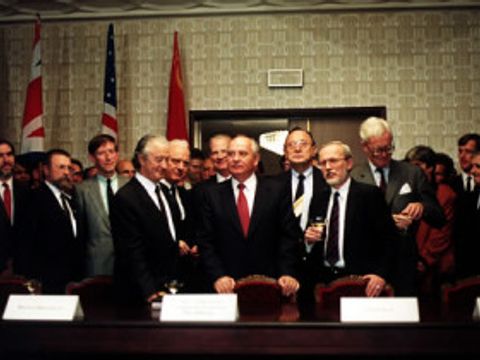 The first and only free elections to the East German parliament are held on March 18, followed in May by the first free elections to the East Berlin city assembly since 1946. The Second World War’s victorious powers and the two German states sign the “Two Plus Four” Treaty in Moscow on September 12, arranging for unification under international law. Germany is given full sovereignty, and Berlin’s Four-Power status expires. The unification of Germany enters into force on October 3 with a state ceremony in Berlin, after which the Berlin House of Representatives and the German Bundestag hold new elections. 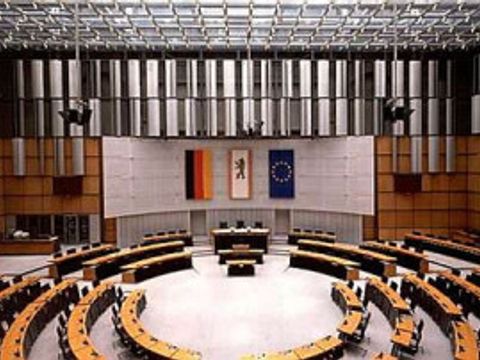 On January 11, the House of Representatives elects the first Senate responsible for governing all of Berlin. On June 20 in Bonn, the German Bundestag decides to move the seat of the German government and parliament to Berlin, Germany’s new capital.
That same year, Berlin’s governing mayor and Senate Chancellery move from Schöneberg Town Hall to the Berlin Town Hall (“Red Town Hall”) in the Mitte borough.
Since 1993, the House of Representatives, Berlin’s state parliament, has had its seat in the building once occupied by the Prussian State Parliament.

In the summer, American, British, French, and Russian troops bid farewell to the people of Berlin with ceremonies and parades. On September 8, the German armed forces perform a Grand Tattoo (“Grosser Zapfenstreich”) at Pariser Platz in honor of the former protecting powers.

Berlin’s constitution is approved with 75.1 percent of the votes cast in a referendum held on October 22. It is in large part a continuation of the constitution adopted in 1950, with some important new elements: actionable fundamental rights are reinforced and new state goals (such as the right to employment, education, and adequate housing) are added. It also gives constitutional status to environmental conservation and the protection of privacy. Instruments of direct democracy like popular initiatives, petitions, and referendums enhance citizens’ rights to participation in the political process. Berlin’s constitutional court monitors compliance with the constitution. 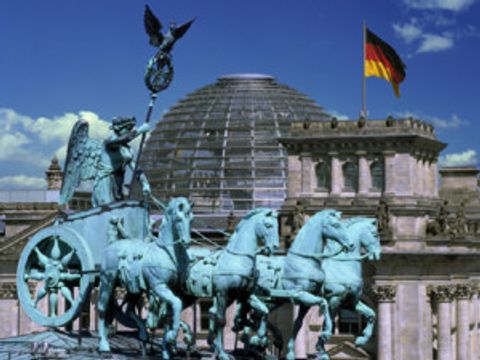 The German Bundestag holds its first session in the newly redesigned Reichstag building on April 19.
Parliamentary and ministry staff start working in new or remodeled office buildings in Berlin, and the Bundesrat also moves from Bonn to Berlin. Many countries move their embassies to Berlin, while the individual German states, the Länder, open offices that will represent them in the capital. 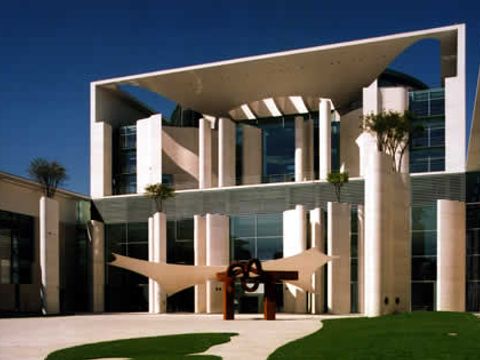 The move of the Bundestag and the government to Berlin is officially concluded when construction is completed on the new Federal Chancellery, occupied in May 2001. Other office buildings go up near the Reichstag building: the Jakob Kaiser House for members of parliament, the Paul Löbe House for parliamentary committees, and the Marie Elisabeth Lüders House for the library and reference and research services.

On October 3, the newly restored Brandenburg Gate is the scene of the national festivities celebrating the Day of German Unity. During the ceremony, the Gate is unveiled to reveal new splendor after almost two years of restoration work.

From May 28 to June 1, around 500,000 people celebrate the first Ecumenical Church Congress.

Four years of renovation of the Olympic Stadium come to an end on June 30.

The Tierpark, the zoo in Berlin-Friedrichsfelde, welcomes several spectacular new arrivals: little “Horas” first sees the light of day on February 14, while two other baby elephants, “Cinta” and “Yoma,” are born soon after. These mini-elephants become the Tierpark’s biggest attraction as it celebrates its 50th anniversary the same year.
The Federal Republic of Germany’s national Holocaust memorial is unveiled in Berlin on May 10. German Chancellor Gerhard Schröder and President Horst Köhler are among the guests. Two days later, the memorial is opened to visitors. According to the memorial foundation, more than 60,000 people visited the site in the first month. The memorial consists of a field of 2711 concrete pillars and an underground information center. 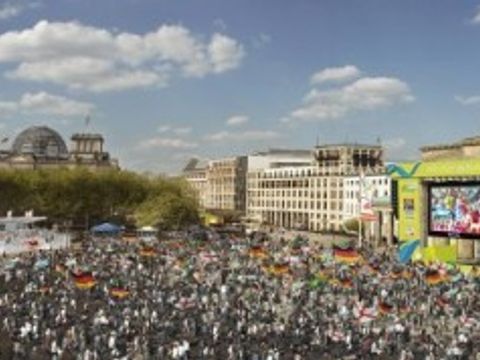 After almost eight years of construction work, Berlin’s main train station – Hauptbahnhof – is officially opened on May 26. A huge party marks the opening and includes a sound and light show illuminating the station’s glass panels in many different colors. More than a million Berliners and tourists come to the two-day event celebrating Berlin’s new landmark.
The Football World Cup takes place in Germany from June 7 to July 9. Four group games, a quarter-final, and the final (Italy vs. France) are played in Berlin. During the five weeks of the World Cup tournament, around ten million people from all over the world follow the games on the big screens of the outdoor “Fan Fest” between Brandenburg Gate and the Victory Column. The event turns out to be a peaceful and friendly international festival.
Two polar bear cubs are born at the Berlin Zoo on December 5, the zoo’s first in more than 30 years. The mother rejects the cubs, and they are bottle-fed instead by one of the zookeepers. Only one of the cubs survives: Knut.

The Humboldt University’s Museum of Natural History reopens on June 13 after two years of renovation work. A special highlight is the 12.5-meter skeleton of a Brachiosaurus.

Berlin hosts the World Championships in Athletics at the Olympic Stadium.

The Neues Museum reopens with the world-famous bust of Nefertiti.

Berlin celebrates a “Science Year” to mark major anniversaries of the State Library (350th), the Charité and the Berlin-Brandenburg Academy of Sciences and Humanities (300th), Humboldt University (200th), and the Max Planck Society (100th).

The FIFA Women’s World Cup kicks off at the Olympic Stadium with the opening game. 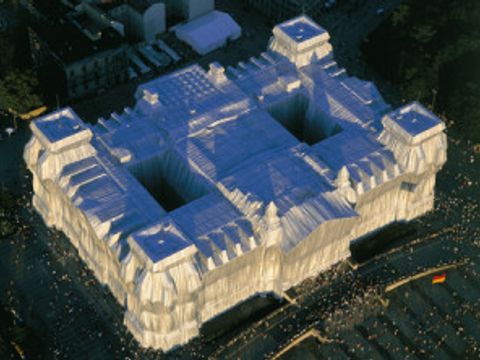