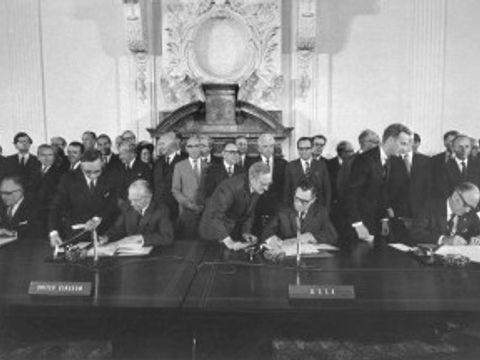 The initialing of the Berlin agreement on September 3 makes possible a number of practical arrangements benefiting the people.

On December 17, the Federal Republic of Germany and the GDR sign a transit agreement improving the flow of traffic on the access routes to West Berlin.

On December 20, the Berlin Senate and the GDR government sign an “arrangement concerning the facilitation and improvement of travel and visitor traffic” and an “arrangement on the regulation of the enclaves question by exchange of territory.”

On June 3 in Berlin, the four foreign ministers sign the Final Quadripartite Protocol to the Berlin agreement of 1971, which also puts the subsequent agreements in force. Half a year later, the Federal Republic of Germany and the GDR conclude the Basic Treaty. West Berlin becomes part of the détente process. [Film].

On the basis of an agreement between the GDR federation of Protestant churches and the GDR government, reconstruction work begins on the Berlin Cathedral, heavily damaged by the war, located on the Spree island in East Berlin’s Mitte borough (completed in 1993). 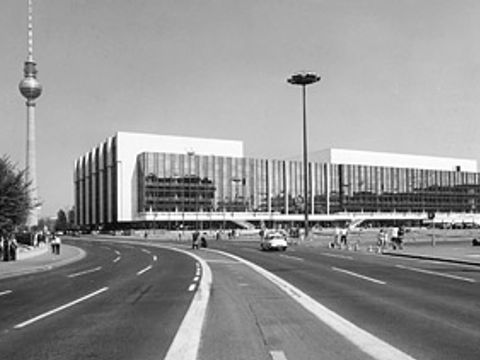 Work on the largest apartment-construction project in the history of the GDR begins in the spring in Marzahn, an area in East Berlin. By 1990, 62,000 apartments will have been built in pre-fabricated high-rises.

On April 23, the Palace of the Republic (Palast der Republik) is opened on the grounds of the former City Palace in East Berlin’s Mitte borough. Starting in 1990, the building remains empty for years until the work of demolishing it begins in 2006. It is making way for the construction of a building that will be a replica of the City Palace torn down in 1950.

The State Library (Staatsbibliothek), designed by Hans Scharoun, opens on December 15 near the Kulturforum in West Berlin.

With the new Marzahn development at its center, the borough of Marzahn is established in January as the first of three new boroughs in East Berlin, followed by Hohenschönhausen (1985) and Hellersdorf (1986).

On April 2, the International Congress Center (ICC) opens at the trade fair grounds in West Berlin.

Construction begins in Hellersdorf, an area in East Berlin, on another new housing estate for 90,000 residents.

The new transit highway to Hamburg is officially opened on November 20.
h4.
1984

West Berlin’s public transportation company BVG takes over the operation of the S-Bahn suburban railway in West Berlin from the GDR’s Reichsbahn on January 9.

On February 8, the GDR’s party and government head lays the foundation stone for the new development area in East Berlin’s Hohenschönhausen. By 1990, 30,000 apartments housing 100,000 people will have been built here.

The 18th Bundesgartenschau horticultural exhibition takes place from April to October in the West Berlin borough of Neukölln at what is today the BUGA Park in Britz.

The Marx-Engels Forum is officially opened on April 4 in the heart of East Berlin.

A bomb explodes at the West Berlin disco “La Belle” on April 5, killing two people and injuring 193 others. 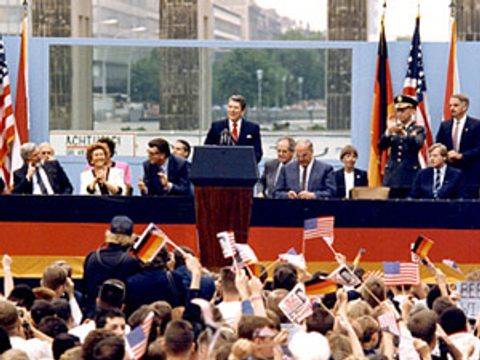 All attempts to hold a joint celebration of the 750th anniversary of the founding of Berlin fail, and the two halves of the city each pay tribute to the anniversary with events of their own. Construction highlights in East Berlin include the inauguration of the reconstructed Nikolaiviertel, rebuilt around the oldest church in Berlin’s city center in a style reminiscent of the area’s historic past, and the reconstruction of Husemannstrasse in the Prenzlauer Berg borough in the style of the 19th century.

The International Building Exhibition takes place in West Berlin. Under the heading of “The inner city as a residential area,” it explores issues like “careful urban renewal” in Kreuzberg and “critical reconstruction” in new development, as with the construction of townhouses and energy-efficient housing in the Tiergarten borough.

More than a hundred members of independent peace and human rights groups are arrested on January 17 in connection with the annual state-sponsored demonstration in East Berlin on the anniversary of the murder of Rosa Luxemburg and Karl Liebknecht.

The symbolic laying of the foundation stone for the reconstruction of the New Synagogue on Oranienburger Strasse in East Berlin’s Mitte borough takes place on November 10.

The growing GDR people’s movement, with its calls for reforms in the GDR along the line of the Soviet Union’s “glasnost” and “perestroika,” puts the GDR leadership increasingly on the defensive.

On October 6, 2,500 people gathered in East Berlin’s Church of the Redeemer (Erlöserkirche) approve a joint declaration drafted by various groups connected to the organization New Forum (Neues Forum) that calls for, among other things, free elections in the GDR.

On October 7, the GDR celebrates the 40th anniversary of its founding in East Berlin. Guests include the Soviet Union’s party and government head Michail Gorbatschow, who makes the famous remark “Life punishes those who come too late.” Demonstrations on the street from Alexanderplatz to the Palace of the Republic and the Gethsemane Church in Prenzlauer Berg call for freedom of speech and reforms in the GDR. In the evening, security forces break up the demonstrations by force, arresting many of the demonstrators. On October 18, at the 9th meeting of the SED Central Committee, Erich Honecker resigns as SED general secretary, head of the GDR Council of State, and head of the National Security Council “for health reasons.” Egon Krenz succeeds him.

On November 4, more than 500,000 East Berliners gather at Alexanderplatz for a demonstration, demanding that the nominal rights to freedom of speech, freedom of the press, and freedom of assembly be honored. The SED leadership promises that restrictions on travel to the West will be eased.

The conflicts over the new travel regulations escalate to the point that the GDR gives way to public pressure and, on November 9, opens the Wall in Berlin and along the German-German border.
The Berlin Wall has fallen. [Film]. At a press conference early in the evening of 9 November 1989, Günter Schabowski, the GDR Central Committee secretary responsible for the media, made an initially unclear, passing reference to a new travel regulation for GDR citizens... Opening and fall of the Berlin WallMore information