The cosmopolitan city of the Weimar Republic 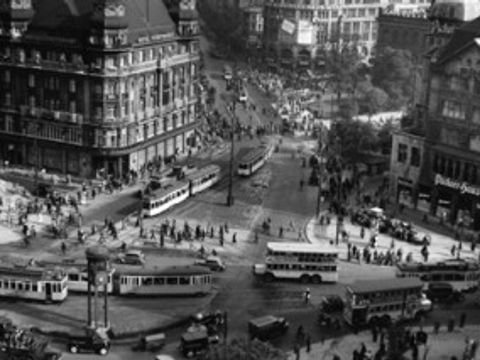 The First World War ends on November 11 with an armistice, after Kaiser Wilhelm II is ousted and flees into exile in the Netherlands. The Social Democratic politician Philipp Scheidemann proclaims the “German Republic” from a window of the Reichstag on 9 November 1918. The Social Democrat Friedrich Ebert becomes chancellor.
On December 30, Karl Liebknecht, Rosa Luxemburg, and Wilhelm Pieck found the German Communist Party (KPD) in Berlin in the grand hall of the Prussian House of Representatives.

The Spartacist uprising of the KPD and Independent Social Democratic Party (USPD) is crushed in Berlin in January, and Karl Liebknecht and Rosa Luxemburg are arrested and murdered in the Tiergarten by Freikorps troops on January 15.

A new Berlin city assembly is elected on February 29 – for the first time not according to the three-class electoral system. The USPD, which had split off from the SPD in 1917, receives 47 seats, while the SPD receives 46, giving the two parties 93 seats out of a total of 144. In another first, 25 women are represented in the city parliament. Gustav Böß becomes lord mayor.

On March 13, parts of the army and other military organizations attempt to stage a coup in response to orders that they disband, a requirement of the Treaty of Versailles. They declare the overthrow of the elected government and proclaim the right-wing politician Wolfgang Kapp the new chancellor. The Kapp putsch collapses on March 17 as a result of a general strike organized jointly by the SPD and KPD.

On October 1, the Greater Berlin Act incorporates 7 towns, 59 rural communities, and 27 estate districts into Berlin and divides the city into 20 boroughs. The city’s population is now 3.8 million, and the municipal area is now thirteen times its previous size, growing from 6,500 hectares to 878 square kilometers. Now the continent’s largest city, Berlin becomes a legendary cultural metropolis in the 1920s. Artists like Otto Dix, Lionel Feininger, Bertolt Brecht, and Arnold Zweig live and work in the city, as do the Nobel Prize winners Albert Einstein and Fritz Haber.

After eight years of construction, the world’s first highway is officially opened in Grunewald as the “automobile traffic and test route (AVUS).”

The German foreign minister Walter Rathenau is murdered by right-wing soldiers in front of his house on June 24. The Treaty of Rapallo he had negotiated in April initiated cooperation between the German Reich and the state that was to become the Soviet Union, officially founded on 30 December 1922.

Inflation reaches its peak. A kilo of rye bread costs 3.6 million marks in September, and a streetcar ticket 150,000 marks on November 22.
Tempelhof Airport goes into operation on October 8.

The first “Grosse Deutsche Funkausstellung,” a radio exhibition, is held at the trade fair grounds, and the foundation stone for the radio tower is laid. A speech by Albert Einstein opens the third exhibition in 1926.

The city councilor for construction Martin Wagner and the architect Bruno Taut start building the “Hufeisen” (horseshoe) housing estate in Britz, conceiving of it as a new synthesis of public housing construction and “a home of one’s own.” The estate was finished in 1931 and is considered a first, outstanding example of the “new living” concept in Berlin.
Berlin has a population of 4,024,165.

The first “Green Week” is held in Berlin in February.

Die Dreigroschenoper” (Threepenny Opera) premieres at the Theater am Schiffbauerdamm on August 31. A total of 147 daily and weekly newspapers are published in Berlin.

Television is introduced to the public for the first time at the fifth “Grosse Deutsche Funkausstellung.”

Berlin is hit by the Great Depression. The city sees 664 businesses go bankrupt, while 450,000 people are unemployed in February. Demonstrations and violent unrest follow; more than 30 people are killed and several hundred injured in the “bloody May” of 1929.

In the elections to the city assembly held on November 17, the National Socialist party (NSDAP) receives 5.8 percent of the vote and, for the first time, has 13 representatives with seats in the city’s parliament.

The number of people out of work climbs to 630,000 by December. The streets of Berlin are the scene of increasingly violent clashes between left- and right-wing groups that leave many people dead or injured. While the NSDAP experiences some losses (from 37.4 to 33.1 percent) in the Reichstag elections on November 6, it still ends up as the strongest party in parliament, just as it did in July. It receives 25.9 percent of the vote in Berlin.