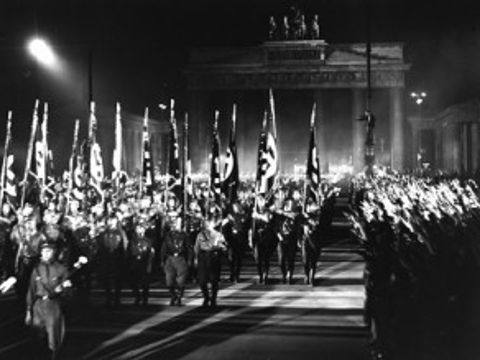 On 30 January 1933, Germany’s president, Paul von Hindenburg, appointed Adolf Hitler chancellor of Germany. The cabinet initially included only two other National Socialists. Conservative forces assumed they would be able to “contain” the NSDAP, but this soon proved to be a fatal mistake. The “emergency decrees” of 4 and 28 February 1933, following the Reichstag fire, suspended basic constitutional rights.

These decrees also made it possible to further consolidate power while maintaining the appearance of legality. Against the backdrop of a campaign of intimidation and obstruction of the political opposition, the Reichstag elections of 5 March 1933 could no longer be considered democratic. The Enabling Act of 23 March 1933 made the parliament irrelevant.

The National Socialists had staged a theatrical torchlight procession already on the night of 30 January 1933, during which units of the SS, the SA, and the “Stahlhelm” veterans’ organization marched through Brandenburg Gate. The painter Max Liebermann, one of Germany’s major Impressionists, commented on the events taking place outside his home at Pariser Platz with the words “I couldn’t even begin to eat as much as I’d like to be able to throw up.” Liebermann, a real Berliner, also experienced hostility because of his Jewish origins. He resigned from the Prussian Academy of the Arts in May 1933, after having been its president for more than twelve years, in protest against the way it – along with many other institutions – had expelled many of its members for political or “racial” reasons, thus “forcing itself into line” before actually being compelled to do so.