Not a pleasure trip 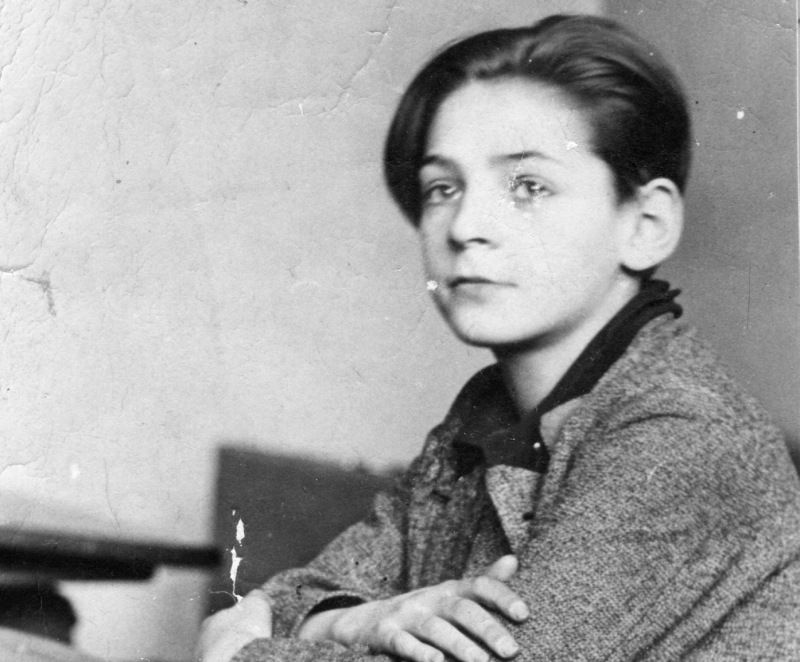 My name is Henry Schindler, son of Robert and Frieda Schindler, born in Dragonerstraße 38/40 (now Max- Beer-Straße), Berlin-Mitte, Germany. I am now the only survivor of my family. My experience with the Nazis started while attending the Jüdische Volksschule Kaiserstraße, an all-Jewish boys school, at age eleven. When classes were finished and it was time to go home, the brown-shirted Hitler youth used to wait around the corner and beat us up. The odds were always against us. We were always cowardly outnumbered but we learned to stick together in groups and do our share of punching. On many occasions the German police looked the other way. I was living in a Jewish community together with some non-Jews, not too many being pro-Jewish. During air raids, when we had to go to the basement of our building, we were segregated. I remember neighbours coming down with their small children, pointing at us and asking their fathers, “Are these the dirty Jews?” Since I was only eleven years old at the time, I could not understand as to why they would brainwash their children to be so full of hate. I did have some non-Jewish friends, but when the time came for them to join the Hitler youth they soon turned against us. Remembering the November 1938 Kristallnacht. We had a small “Shul” on our street. The Nazis took all the prayer books and Torahs, made a pile in the street and started to torch them. One bearded man tried to save a Torah; they grabbed him, beat him up and cut off his beard and payiss. He was lucky they did not kill him on the spot.

1941. All Jewish schools were closed, even trade schools. At age 14, I was taken to do night shift work at a factory making silk materials for parachutes. It was October 1941, when we had to start wearing the yellow Star of David to identify us as Jews. Food was rationed and Jews were only allowed to go shopping between the hours of 3–5 PM. I was often hungry. All restaurants had signs “No Jews allowed.” In order for me to buy a meal before I went to work, I used to fold my jacket over so that the yellow star would not be seen. I was lucky the Gestapo never caught me. On May 27, 1942, a Gestapo agent and a German policeman came to our apartment with orders to arrest my father. They waited until he came home, told us, “Don’t worry, you will see your father in a few days,” then they took him away. He was one of 154 men arrested that day. Within a week the rest of my family, my mother, my younger brother and myself had to report for deportation to Theresienstadt concentration camp. This transport consisted of the families of the 154 arrested the previous week. We were all expecting to see our fathers in this camp but it was not the case. The S.S. made all of us assemble in the courtyard of the camp, making sure no one else was around. Then another S.S. officer read off all the names of the arrested fathers. After he had finished he stated that these men had been executed on orders from Heinrich Himmler.

“Abtreten” (dismissed). This was a terrible moment for all of us, I don’t have to tell you how everyone present reacted. May 28, 1942. Concentration Camp Sachsenhausen, near Berlin. 154 men, our fathers and 96 other prisoners were executed on this day. Reason given by the Nazis for this slaughter was in retaliation for torching a propaganda display in Berlin called the “Soviet Paradise,” and also for the killing of S.S. man Reinhardt Heydrich in Prague. Life in Theresienstadt went on. Young people were made to work while the elderly waited for their food ration to stay alive. Many elderly died of malnutrition or other illnesses, very little medication was available. One of my jobs, at the age of 16, was transporting dead bodies. This left a long-lasting impression on me, especially since I had lost my older brother when I was 13 years old and then my father. Another job was outside the walls of the concentration camp, building barracks for the Germans. One day on the way back to camp we were searched for contraband. The policeman who checked all my pockets found a few particles from the construction job and gave me a heck of a beating. He had to let out his cruelty on someone. Stayed in Theresienstadt until October 1944. Deported to Auschwitz on crowded cattle wagons, a nightmare by itself. Upon arriving, we were met by Dr. Mengele, the S.S. Hangman. He decided by looking at you; if you were fit enough to work, then you went to the safe side. If he flicked his finger for you to go to the other side it meant immediate death in the gas-filled showers and then cremation. At this time we lost several of our friends, maybe half the transport. I myself arrived with a pretty heavy winter overcoat, looked strong enough to do some slave labor and was sent to the right side; my life was saved. We were then sent to the “real” showers, stripped naked, everything was taken away from us, we were then shaved from head to toe and sprayed or rubbed down with a very strong disinfectant like Lysol, enough to make your skin burn. We were then issued our striped prison garb. Conditions in Auschwitz/Birkenau were terrible. Within a few days we were tattooed with a number and told, “From now on you answer to your number, no more Henry Schindler, you are number B12777.” Crematoriums were burning day and night, the smell was unforgettable. Where was GOD? How long can this go on? Later, my younger brother George and my best friend Gerhard were sent to another camp called Gleiwitz III; we volunteered and always managed to stay together. This camp was a German ammunition factory. I entailed using a very costly cutting steel to operate the lathe. The daily threat was always there. “You break the steel, it is sabotage and back to Auschwitz you go.” This meant good-bye Henry. Even with these threats we did our share to ruin quite a few bombs. 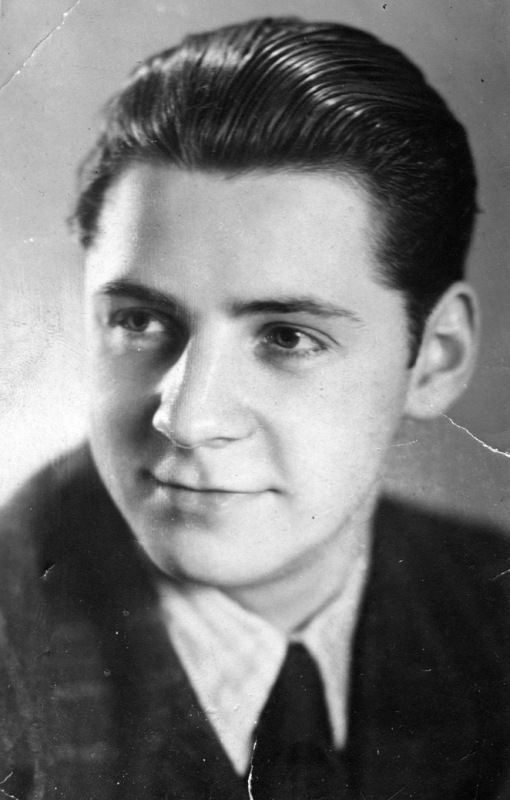 One day at the morning head count some boys were missing. The whole camp was ordered to do “sport” which was jumping on your knees like a frog over a sand hill. Some of the elderly dropped from exhaustion, never to be seen again. This was our share of the punishment for the escape. The next day with the help of German shepherd dogs, the boys were caught and brought back to camp. It was wintertime, the escapees were tied up and made to stand outside without coats or food for punishment. This was to show us what would happen if we tried to escape. I don’t recall how long this punishment lasted. One day the S.S. came and ordered the camp to be evacuated because the Russian army was advancing. They got us all together and began marching us towards Germany. We marched on icy roads. I had wooden clogs, not leather shoes, not easy to keep up. The soldiers had orders to shoot those who could not walk. There were plenty of bodies on the side of the road from other marchers who could not keep up. We finally reached another camp called Blechhammer, stayed there overnight and continued our death march the next day. A few of us decided to hide out. It was taking a chance, going with them on the march and get killed or stay behind and get caught. The next day we saw a lone S.S. man at the camp. He took out his pistol and counted how many of us had stayed behind. I don’t remember what he said to us but since we were starving we ran and found a food storage room. Everyone tried to grab what they could. The S.S. man did not know what was going on and started shooting. I don’t recall if anyone got hurt. Meanwhile, my brother was able to grab a bag of sugar and we traded this with others to get a piece of bread. The next day we found the S.S. man’s uniform; he had disappeared. This camp was empty. No water, no electricity. It had a water reservoir but we could not use the water since there were a lot of dead bodies in there. In order for us to have a drink we melted snow off the ground. The Russian army, which was nearby, came into the camp. One of our friends who spoke several languages, including Russian, begged for food for all of us. Although they did not have much themselves, they threw a wild boar’s head at us. This was made into our first meal. Blechhammer was an international prison camp. We tried to find something to eat but instead we found several English uniforms and exchanged this warm clothing for our prison garb. Just my brother and I went around this tremendous camp looking for anything we could use for the seven of us. The other five stayed behind. When the Russian soldiers saw us they took us as their prisoners. We had to unload a train full of German ammunition. After a long day, they took us with them, locked us in a guarded barrack so that we could continue working the next day. We had just escaped from the Nazis a couple of days ago and the Russians had the audacity to grab us, no matter what we told them. We really thought they were going to send us to Siberia. In the middle of the night when the guards were sleeping, we escaped into the woods to get away. We did not realize what we were getting ourselves into. Russian patrols were in the dark woods with shepherd dogs and tommy guns. The dogs were barking. The Russians were shooting at us. We ran and ran to get away. In the distance we spotted a dim light which turned out to be barracks holding Italian prisoners. In our excitement we couldn’t find a door to enter, instead we both jumped through the glass window. Once again our lives were saved. The next day we went back to our other five friends. After our experiences we decided to move towards Hungary and from there to Romania on whatever transportation was available, mainly trains. Once we arrived in Bucharest, we went to the Red Cross to get some kind of I.D. We registered to go to Palestine, now Israel. In the same office they informed us that there were still survivors at the Theresienstadt camp. We decided to return there to look for family survivors. We were fortunate to find our mother had survived with our friend Gerhard’s mother. They were able to work, which saved them from being sent to Auschwitz. Sadly, the other boys did not find anyone. In 1946 we all came to New York and my mother lived to a ripe old age of ninety two. My younger brother passed away in 1995.