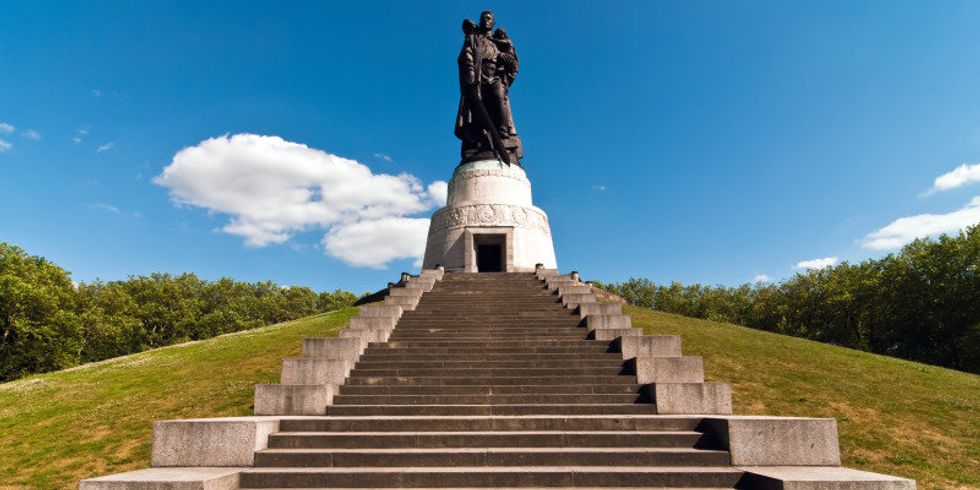 The Soviet Memorial in Treptower Park was established between 1946 and 1949 as a monumental burial site for 5,000 Red Army soldiers who had died in battle. The design was by an artists’ collective made up of Yakov S. Belopolski (architect), Yevgeni W. Vuchetich (sculptor), Alexander A. Gorpenko (painter), and the engineer Sarra S. Valerius.

The memorial grounds cover ten hectares and extend from Puschkinallee to the street Am Treptower Park. Here visitors enter the park through a massive granite arch and see the sculpture “Mutter Heimat” (Mother Homeland) in a clearing in front of the actual memorial. The axis leading to the tomb begins here and takes visitors down a promenade through two stylized red flags also sculpted in granite. To the right and left, in front of the flags, two kneeling figures – an old soldier and a young soldier – are intended to prepare visitors for the solemnity of this burial site.

4,800 soldiers killed in battle are buried under the inset sections of the lawn, while another 200 were laid to rest under the hill bearing the tomb. Eight sarcophagi on each side of the rectangular lawn sections symbolize the republics of the Soviet Union at the time. Reliefs illustrate scenes from the “Great Patriotic War” against National Socialist Germany.

The monumental tomb in the center of the memorial is crowned by a 70-ton bronze sculpture of a Soviet soldier. With his sword lowered and his foot on a shattered swastika, he cradles a child in his arm. His stance proclaims victory. The figure mandates peace and, at the same time, seems to be promising a secure future.

Memorial and wreath-laying events honoring the Soviet victims of the Second World War are still held in Treptower Park.

Along with the other two Soviet memorials – in the Tiergarten and in the park Schönholzer Heide – the Treptow burial site was turned over to the federal state of Berlin when the CIS troops left Berlin and is now protected by law.