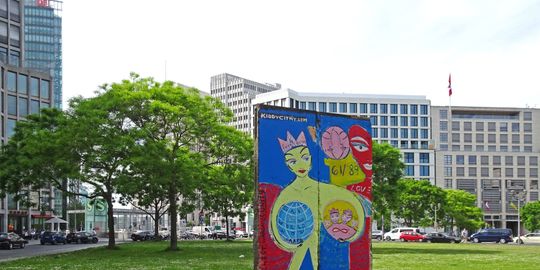 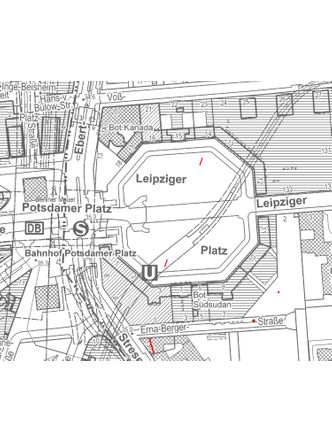 The area around Potsdamer Platz and Leipziger Platz was one of Europe’s major urban centers and a symbol of Berlin as a metropolis. The construction of the Wall in 1961 transformed these squares into an urban “no man’s land.” With the exception of the remains of the Grandhotel Esplanade and Weinhaus Huth, the last few buildings not destroyed in the war were torn down to accommodate a wide border strip, and the now “lost” Potsdamer Platz – famous also due to the Wim Wenders film “Der Himmel über Berlin” (Wings of Desire) – became a popular tourist attraction. After reunification in 1990, the area underwent another transformation. Within just a few years, a new business and cultural center emerged from “Europe’s largest construction site,” eliminating almost all signs of the former border installations here

You can see the area’s only remaining section of the Hinterland wall (inner wall), including the knee-high red-and-white barrier piping, at its original location on the corner of Stresemannstraße and Erna-Berger-Straße. Here the wall was contiguous to the fire wall of the neoclassicist addition to the Prussian ministry of agriculture built from 1913 to 1919; from there it ran diagonally across the octagonal Leipziger Platz towards Brandenburg Gate.

Other segments, all of which were part of the Hinterland wall, can be found to the north and south of Leipziger Platz. Because the GDR wanted to present a more orderly view to the tourists looking over the Wall from the West Berlin side, the Hinterland wall here was constructed along the lines of the “Grenzmauer 75,” the form otherwise used only for the border wall (outer wall) facing west. The GDR leadership welcomed the construction of the “Grenzmauer 75,” saying that it would “further enhance the political appeal of the GDR capital Berlin at the popular sightseeing attractions Brandenburg Gate and Leipziger Platz.”

What little remains of the Berlin Wall at this prominent location has been listed as a historical monument since 2001. Plans for the new Berlin seat of the Federal Ministry for the Environment, Nature Conservation and Nuclear Safety include integrating the section of the Hinterland wall on the corner of Stresemannstraße and Erna-Berger-Straße into the foyer of the building.