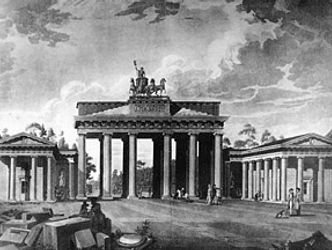 On 18 January 1701 in Königsberg, the elector Friedrich III has himself crowned Friedrich I, King in Prussia. Berlin becomes the royal residence.

King Friedrich I decrees the unification of the five towns of Berlin, Cölln, Friedrichswerder, Dorotheenstadt, and Friedrichstadt to form the capital and royal residence of Berlin. The unified city has a population of 55,000.

Compulsory school attendance is introduced in Berlin, although it takes several decades for it to become established.

A cabinet decree of Friedrich I converts a “plague house” built in 1709 at the lower end of the Spree river into the Charité. Today the Charité is Berlin’s oldest hospital and, at the same time, Germany’s oldest medical school.

Until 1739, around 1,200 Bohemians settle in Berlin to escape religious persecution. In 1737 they found Böhmisch-Rixdorf (now Neukölln). 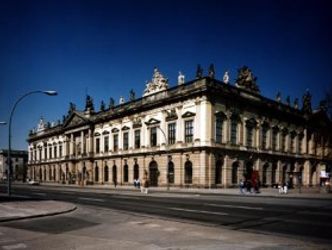 Starting in 1740, Berlin develops into a center of the Enlightenment and of constant construction under Friedrich the Great. The large representative buildings put up in this era still dominate the cityscape around Unter den Linden: the Armory (Zeughaus, completed already in 1707 – photo), the Palace of the Crown Prince (Kronprinzenpalais, 1732), the Opera Palace (Opernpalais, 1737), the Staatsoper opera house (1742), the Prince Heinrich Palace (Prinz-Heinrich-Palais, 1756, now Humboldt University), St. Hedwig’s Cathedral (1773), and the Old Library (Alte Bibliothek, 1780).

The first German-language theater opens in Berlin on Behrenstrasse. Plays had been performed only in foreign languages, usually French, before that. The first recorded theater performance in Berlin took place at the palace in Cölln in 1541.

The bridle path from the City Palace to Tiergarten that was laid out in 1647 is expanded into a magnificent avenue (Unter den Linden).

Brandenburg Gate, under construction by Carl Gotthard Langhans since 1788, is officially opened. The Gate is crowned with Johann Gottfried Schadow’s quadriga in 1793.

The road from Berlin to Potsdam is opened as Prussia’s first paved highway.

Berlin gets its first steam engine. The cotton manufacturer Johann Georg Sieburg uses the engine, which came from England, to power spinning machines.

The cattle market and parade ground just outside the city wall is named Alexanderplatz in honor of the Russian czar Alexander I, who visits Berlin in October 1805.

On October 27 the French emperor Napoleon and his troops march through Brandenburg Gate into Berlin. French troops occupy the city until December 1808, and French rule in Prussia is finally ended only in 1814.

New municipal legislation drafted by Baron vom Stein goes into effect in Prussia and grants Berlin wide powers of self-government. Elected for the first time, a city assembly puts forward a mayoral candidate to be approved by the king. 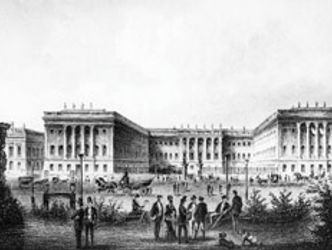 The continent’s first steam locomotive is manufactured in the royal iron foundry established in 1804 on the Panke river.

The city’s economic growth attracts many new workers to Berlin. The first tenements are built on Gartenstrasse near Hamburger Tor.

Gas lighting is put into operation in Berlin for the first time on Unter den Linden. 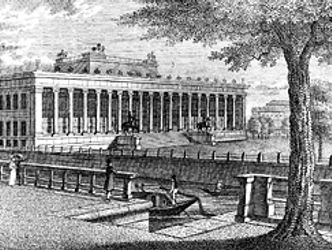 The Altes Museum (Old Museum), built by Karl Friedrich Schinkel, opens at the Spree island’s Lustgarten in the first building in Prussia designed to be a museum.

August Borsig lays the foundation stone for his machine factory on Chausseestrasse in Wedding. Many manufacturing facilities, some of which achieve world renown, are to follow: Siemens (1847), Schwartzkopff (1852), Schering (1864), and AEG (1883), among others.

Potsdam and Berlin are connected by Prussia’s first railroad line.

The Zoologischer Garten is opened on the southwestern edge of the Tiergarten park as Germany’s first zoo and, until 1900, the world’s largest.

As a counterpart to the (royal) Tiergarten park, Volkspark Friedrichshain, covering 52 hectares, is opened on the grounds of a former vineyard in the densely populated eastern part of the city as the first recreational area for all social classes (official opening 1848). Even today, it is Berlin’s second-largest park (next to the Tiergarten) and has given its name to the surrounding borough.

The growing city attracts a stream of new residents. Berlin’s population, including the adjacent areas, grows to more than 400,000, while large parts of the population sink into poverty as a result of burgeoning industrialization. Caring for the poor takes up 40 percent of the city’s budget.

Social hardship and the curtailment of political freedoms result in the outbreak of a democratic, middle-class revolution in March. Despite early successes, the revolution ends in November 1848 with the arrival of 13,000 Prussian soldiers under the command of General Friedrich von Wrangel and the imposition of a state of emergency until July 1849. Most of the rebels killed are buried in the cemetery dedicated to them (“Friedhof der Märzgefallenen”) at Volkspark Friedrichhain. Platz des 18. März, the square west of Brandenburg Gate, also commemorates this revolution.

Berlin’s first waterworks goes into operation as a part of extensive plans for a modern water supply system.

The incorporation of a number of suburbs (Wedding, Gesundbrunnen, and Moabit, as well as parts of Charlottenburg, Schöneberg, Tempelhof, and Rixdorf) brings the city’s area from 35 to 59 square km and the population to roughly 550,000. 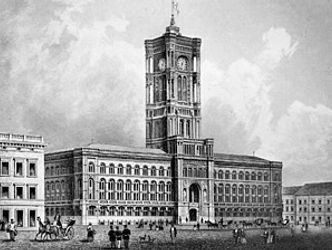 The new Berlin Town Hall, still in use today, is completed and, because of its red-brick construction, quickly dubbed the “Red Town Hall.”